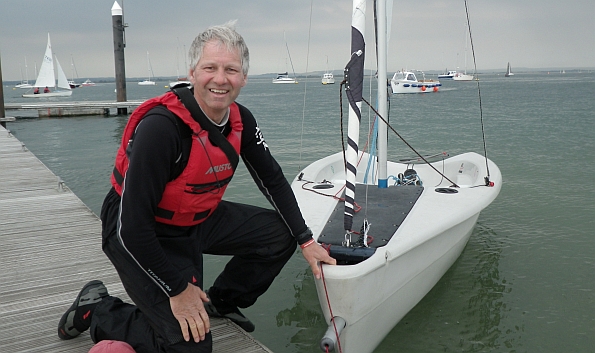 RYA sailing coach, Melvyn Cooper, the inspiration and founder of the highly successful HISC Get Racing Club, was named runner up in the 2015 Sports Coach of the Year in Havant last week . . . Launched in April 2014, Melvyn (of Melvyn Cooper Sailing) has been the driving force behind the new Get Racing Club which encourages new sailors to have a go at racing in a fun and informal format at HISC . . .

Commenting on receiving the award Melvyn noted, “It was really exciting to be nominated by Hayling Island Sailing Club and I was absolutely thrilled to collect a runner up prize for Coach of the Year 2015. It’s a great honour.”

Dates for the 2015 Get Racing Club events are all arranged and the club has been active over the winter season with a series of Winter Talks, the second of which is taking place this Saturday 7 March 2015.

The HISC Get Racing Club start of season party will take place Saturday 4 April 2015 with the first one-the-water event of the season kicking off on Saturday 11 April 2015.

The Sports Coach of the Year is part of Havant Borough Sports Association awards recognition for achievement.